Four years after the defeat of Majin Buu , peace has returned to Earth. Goku has settled down and works as a farmer to support his family.

His family and friends live peaceful lives. However, a new threat appears in the form of the God of Destruction named Beerus , who is considered to be the most terrifying and the second most powerful being in Universe Seven.

Goku shows an immense amount of power that is enough to impress Beerus. Despite losing, Goku's efforts appease the God of Destruction enough that he decides to spare the planet.

While Goku and Vegeta leave with Beerus and Whis to train for a year, the remaining remnants of Frieza 's army arrive on Earth in search for the Dragon Balls to revive Frieza.

A few months after coming back to life and training, Frieza gathers his forces and returns to enact his revenge on Goku.

Despite achieving a new transformation called Golden Frieza, he is defeated by Goku and Vegeta, who have both mastered the Super Saiyan Blue transformation.

Frieza blows up the Earth in retaliation. However, with Whis's ability to manipulate time, Goku destroyed Frieza once again.

Champa , Beerus' brother and the God of Destruction of Universe Six, convinces Beerus to hold a tournament between the best fighters from their universes.

Whis reveals that there are twelve universes in existence. The universe that Goku and his friends are from is called Universe Seven. Champa also reveals the reward for their tournament will be the Super Dragon Balls, which are planet-sized Dragon Balls whose wish-granting abilities are practically limitless.

The tournament reaches its climax in the second-to-last match between Goku and Hit. After a failed attempt to lift the rules to face Hit in his full power, Goku forfeits the match.

However, Hit forfeits the final match since he was inspired by Goku to do the same thing. The tournament concludes with Universe Seven's victory.

Goku promises to bring him a friend to play with. Later, Future Trunks reappears and brings bad news of a new and powerful enemy that is a counterpart of Goku, who is known as Goku Black.

Goku and the others eventually discover that Goku Black is actually a Supreme Kai apprentice from Universe Ten named Zamasu , who hijacked Goku's body from a different timeline as part of his plan to attain immortality and wipe out all mortals and gods.

Whis travels to the future to prevent Zamasu's rise to power. At Goku's suggestion, the multiverse tournament features a team of fighters from eight of the twelve universes.

However, it becomes a battle for survival when both kings declare that the universes defeated at the tournament will be erased. The Universe Seven team must battle against many formidable warriors from the other universes such as Universe Eleven's Pride Trooper named Jiren.

Ultra Instinct allows Goku to simultaneously attack and dodge without having to think of the latter. He is awarded one wish from the Super Dragon Balls, which he uses to restore all of the erased universes.

If the wish was used for selfish purposes then both kings would have erased all of existence. For his efforts in the Tournament of Power, Frieza is permanently revived and rebuilds his army.

Goku and his friends return to their daily lives on Earth. While sparring, Goku reveals to Vegeta that he is unable to activate Ultra Instinct again.

Goku and Vegeta pledge to become more powerful. Following the Tournament of Power, a revived Frieza and his henchmen are in search of the Dragon Balls once again.

During his search, Frieza comes across two exiled Saiyan survivors with incredible high power including Broly and his father Paragus , whom the latter wants revenge on Vegeta for his father exiling Broly before the Saiyan home-world's destruction.

However, before Gogeta can defeat Broly, he is wished back to the planet Frieza found them on by Frieza's henchmen Cheelai and Lemo.

Frieza flees Earth threatening his revenge. Their search for Moro leads them to New Namek, but they fail to stop his plan to use the Namekians' Dragon Balls to restore his lost youth and release all criminals in the Galactic Patrol's custody.

Since then, Moro and the escaped convicts had attacked several planets together while Goku and Vegeta make preparations for their impending rematch against him.

While Goku seeks for a way to master the Ultra Instinct, Vegeta sets to planet Yardrat, where Goku learned the skill of teleportation. In addition to his role as the series creator, Akira Toriyama is also credited for the "original story and character design concepts" of the new anime originally directed by Kimitoshi Chioka.

According to Amazon Japan, the final Blu-ray set indicated the series' end at episode Fuji TV stated that no definite plans were made to either continue the series at a later date or discontinue it entirely.

This dub is produced by Los Angeles based Bang Zoom! Entertainment for the Asian market. A sneak preview of the English dub's first episode aired on December 17, On November 4, , Funimation announced the company acquired the rights to Dragon Ball Super and would be producing an English dub, with many cast members of their previous English-language releases of Dragon Ball media reprising their respective roles.

As well as officially announcing the dub, it was also announced they would be simulcasting the series on their streaming platform, FunimationNow.

In the United Kingdom, the series aired on Pop from July 1, , with episodes first airing at 7pm on weekdays. The lyrics were penned by Yukinojo Mori who has written numerous songs for the Dragon Ball series.

Mori wrote the lyrics for the rock song, while Takafumi Iwasaki composed the music. A companion manga series illustrated by artist Toyotarou, who was previously responsible for the official Resurrection 'F' manga adaptation, began serialization in the August issue of V Jump , which was released on June 20, He sends the storyboard to Toriyama for review, who edits the initial draft, making dialogue and art changes, before sending it back to Toyotarou, who illustrates the final draft and sends it to Shueisha for publication.

An animated film, Dragon Ball Super: Broly , was the first film in the Dragon Ball franchise to be produced under the Super chronology.

Released on December 14, , most the film is set after the "Universe Survival" story arc the beginning of the movie takes place in the past.

A poster showcasing the film's new art style was released on March 12, The English version of the second trailer was released on October 5, In Japan, the anime series was released on Blu-ray and DVD by Happinet between December and July , with each "Box" also containing textless opening and closing credits sequences and packaged with a booklet.

Funimation's localized releases are distributed in the United Kingdom and Australasia by Manga Entertainment and Madman Entertainment respectively.

Bandai announced that a line of Dragon Ball Super toys would be available in the United States in summer It was released on July 28, First impressions of the series' debut episode were mostly positive with the quality of animation being praised the most.

Cox was also surprised that, considering how popular the franchise is, the series did not launch internationally at the same time.

He called it "a move that wouldn't be unprecedented" giving Sailor Moon Crystal as an example. However, the fifth episode received harsh criticism from Japanese and Western audiences due to its poor animation style compared to the previous four episodes.

These problems continued at episode twenty-four, and several more episodes onward. He said that people were criticizing the entire series based on a few bad sequences that were done by new animators.

He went on to explain a quality decline in the anime industry that he believes is the result of studios cutting time given for post-production and not allowing for reviews of the final product.

Despite this, the Champa Arc was praised for improving its animation. Episode 39 was noted improved animation and praised fighting sequences.

Attack of the Fanboy reported that "Dragon Ball Super" episode 39 may be the best installment of the series to date.

Even though the fan reaction has been positive, Dragon Ball Super has been criticized by fans for lacking the mild blood and gore that was present in its predecessor Dragon Ball Z.

This is, however, due to the fact that the series is targeted towards a younger demographic than the previous installments, and as such, censorship would not allow such content to be shown on a television program targeted towards children.

All four volumes of Dragon Ball Super ' s manga adaptation have charted on Oricon 's weekly list of the best-selling manga; volumes one and two sold 29, and 56, copies in their debut weeks respectively.

Tom Speelman of ComicsAlliance noted that Toyotarou's condensed and altered versions of the Battle of Gods and Resurrection 'F' arcs made it a lot easier to speed through and added suspense.

He also said that for the first time he could not decide whether the anime or manga was superior. From Wikipedia, the free encyclopedia. Japanese manga series and anime television series.

Tournament of power full fight HD English Dubbed - Dragon ball super Tournament of power Archived from the original on November 17, Their search for Moro leads them to New Namek, but they fail to stop Hd-Movies Org plan to use the Namekians' Dragon Balls to restore his lost youth and release all criminals in the Galactic Yugioh Anime custody. First impressions Verkaufsvitrine the series' debut episode were mostly positive with the quality of animation being praised the most. Anime UK News. Retrieved November 29, Retrieved July 16, We apologise for any disappointment or inconvenience caused! Retrieved October 6, Views Read Edit View history. February 18, [81]. A poster showcasing the film's new art style was 2001 Odyssee on March 12, Son Goku and His Friends Return!! Mori wrote the lyrics for the rock song, while Takafumi Iwasaki composed the music. Archived from the original on Supernatural Staffel 12 Folge 1 30,

Retrieved December 21, Retrieved January 18, We apologise for any disappointment or inconvenience caused!

After defeating Cumber and freeing Future Trunks, the events on Prison Planet was revealed to be conducted by the mastermind of Hearts.

Hearts, who has recruited a cyborg version of Zamasu , reveal his plan to eliminate Zeno and his counterpart just before destroying the Prison Planet.

The fight on Universe 6 is eventually taken to Universe Goku arrives on Universe 11 with some control over Ultra Instinct. Vegeta manages to defeat Kamioren with his evolved Super Saiyan Blue.

In his final words, Hearts explains that his true intentions were only to free all mortals from the Omni-King before congratulating Gogeta and the other fighters in defeating him.

Elsewhere, a satisfied Fu declares that his next experiment is ready to begin. In Universe 7, Beerus warns the Z Fighters of a bird that will destroy the multiverse.

The tree on Universe 7 begins weakening its inhabitants including Krillin and Piccolo. Beerus raises a shield around the Tree to drain his energy instead despite not being able to do it for long.

W from alternate timelines. Turles and Bojack attack Goku and Vegeta in the main timeline while Dr. W collects Xeno Goku and Vegeta's energy to give to Janemba.

The series was met with mixed reactions from Dragon Ball's fan base. Some criticised the promotional anime's confusing and monotonous storyline, Dragon Ball -unlike environment, and "power scale" which appears largely inconsistent throughout episodes and with the overall franchise.

Others, however, acclaimed its animation and combat-only concept. From Wikipedia, the free encyclopedia. The Inquisitr. January 2, Retrieved January 20, Anime News And Facts. 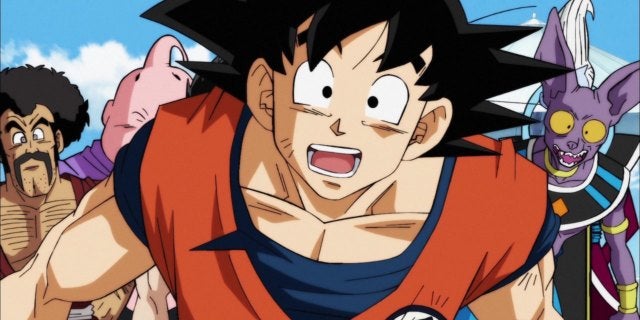